A streamer is a device that sends sound directly from one device (such as a TV) directly into the cochlear implants. This is very useful, as it provides an extremely easy listening experience for the user. Streaming technology is used by all 3 manufacturers. The primary difference between them is whether an intermediary device is required or not.

Cochlear Americas
Cochlear Americas does NOT require an intermediary device to wirelessly communicate between accessories. For instance, patients with Cochlear Americas’ cochlear implants can directly stream television into their implants with the TV Streamer. They do not need a device worn around the neck or anything additional in order to do this. They can also stream phone calls directly into the implant(s) using the Phone Clip. The Mini Microphone 2/2+, TV Streamer and Phone Clip that can directly stream to the cochlear implant are shown below: 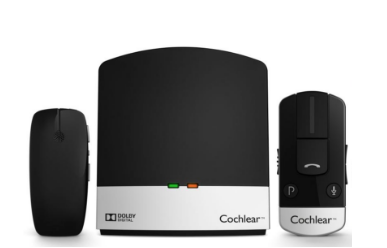 Advanced Bionics & Med-El
Advanced Bionics can require an intermediary device, depending on the accessory. If it is a Roger system, it will require a receiver boot, which attaches to the bottom of the cochlear implant. This will allow the cochlear implant to wirelessly communicate with the Roger Pen and the Roger Clip-On Mic. The Roger Pen is a wireless microphone that can be used in all environments. It offers the best speech understanding in noise and over distance; plus it uses Bluetooth connectivity.

If the accessory the patient chooses is not a Roger accessory, it will require an additional device called a ComPilot. This allows the user to access other Bluetooth products such as the TVLink and Remote Mic. It’s a necklace that’s worn by the patient and can use its Bluetooth connection to pair with mobile phones, computers, and many other devices. This device has a lot of additional functions such as changing programs, adjusting volume, streaming TV when paired with the TVLink, streaming phone calls and much more.

The wireless accessories used for Advanced Bionics and Me- El are shown below: 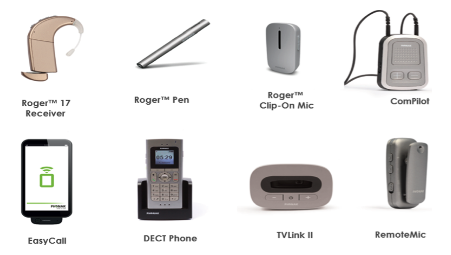 For more information about streaming technology, contact Arizona Hearing Center at 602-277-4327. We’d be happy to help!